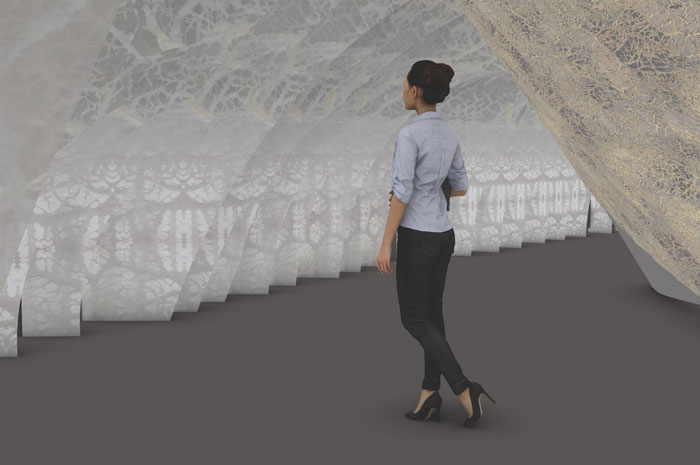 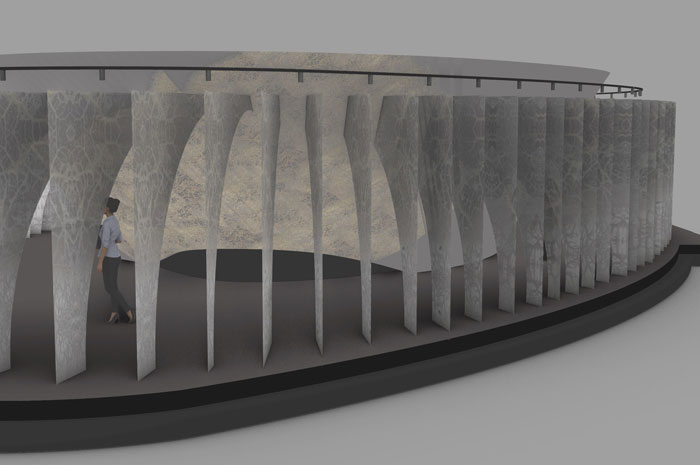 Fragility and Permanence is an ambitious, striking site-specific installation, proposed as 3 different parts that can be combined as two parts or done individually. The proposed sections are made of stucco and gold leaf, pig’s caul fat and plastinated caul fat.

This proposal aims to reflect the duality contained within nature…between a fixedness – on the walls drawing on ideas of trees, they roots, and a rootedness in the landscape and movement and opening as it grows and molds, expanding upwards through the walls; into the curtain like sections which moves as the viewer passes through the space. On first sight it appears as part of the structure, roots-like in its form; move closer and the roots/ veins, edged in gold leaf, suggest a lightness - the vascular network vital for the survival of an organism, opening, extending and expanding in a gesture of welcoming.

The structure of the chosen materials are devised to consider how the natural elements might interact with the form and landscape that surrounds it and to allow an openness to prevail in its form. Molded veins (fixed to the wall); curtains hanging of the ceiling allow the form to appear both solid and light simultaneously, allowing small amounts of light at a time to passes through and suggesting an organism an internal body structure in motion.

The glinting gold leaf features are a signature element of some of Elpida’s previous works and provide continuity and an unexpected magic to the work – caught in a fleeting glimpse as viewers pass by.

Elpida worked in collaboration with Yinan Song to create the original simulation.