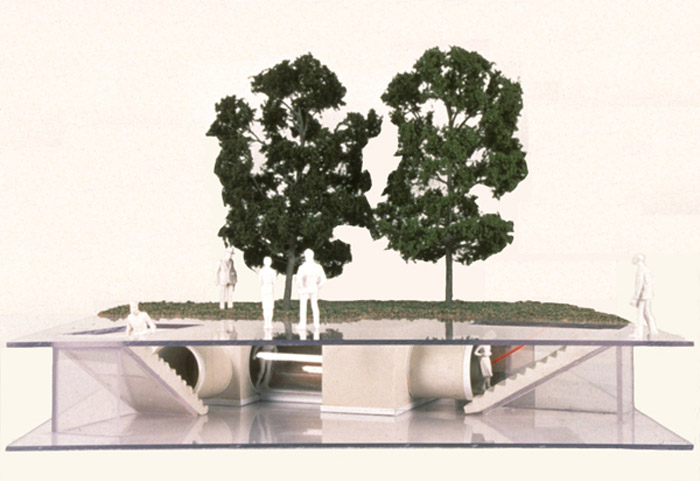 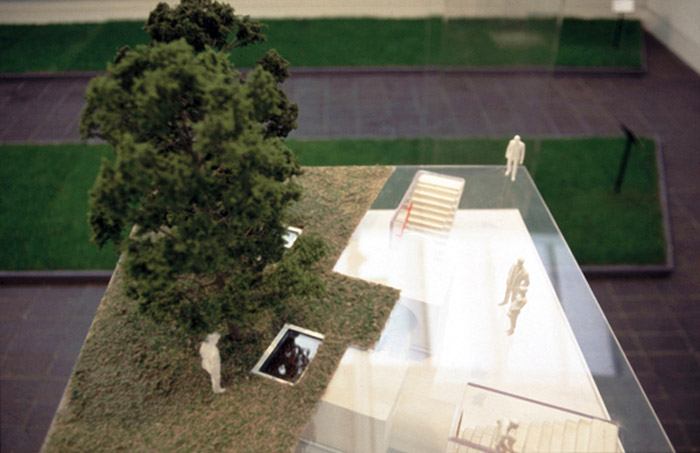 “Hadzi-Vasileva wants to give us the direct experience of going under the earth, encountering the darkness, moisture and narrowness of tunnels running below two mature trees. For some visitors, it may well prove a disturbing, claustrophobic experience. But she does not aim merely at testing our ability to cope with confined spaces. ‘I hope people will react to nature in a different way down there’, she explains. ‘From below, they’ll find a completely different perspective, a different feeling. I see the underworld as another living space that we’re normally unaware of.’ Hence her decision to choose the title Ambush for the work. She wants it to be a surprise, and nothing will prepare the viewers for the sculpture as they approach it aboveground. ‘You won’t see much’, she says, ‘just two glass panels set in the earth and two openings. Then quite suddenly, you’ll see something far below you, straight under your feet.’ Walking down the stairs to a depth of around five metres, visitors will find themselves in a shuttered concrete tunnel.

Last year in the New Forest, Hadzi-Vasileva produced the first version of Ambush. It was only open to the public for one month, but the experience gained from this temporary project proved invaluable.

But Ambush II promises to become her most audacious project so far, and Hadzi-Vasileva looks forward to working with trees ‘on along-term basis’, finding out how Ambush II ‘would change and grow, responding to the climate and environment over time.’”

JSP catalogue 2001, extract from the text by Richard Cork